The Nobel Prize in Physiology or Medicine 2009

The Nobel Prize in Physiology or Medicine 2009 was awarded jointly to Elizabeth H. Blackburn, Carol W. Greider and Jack W. Szostak "for the discovery of how chromosomes are protected by telomeres and the enzyme telomerase."

These discoveries explained how the ends of the chromosomes are protected by the telomeres and that they are built by telomerase.

If the telomeres are shortened, cells age. Conversely, if telomerase activity is high, telomere length is maintained, and cellular senescence is delayed.

The award of the Nobel Prize recognizes the discovery of a fundamental mechanism in the cell, a discovery that has stimulated the development of new therapeutic strategies.

Chromosomes are highly condensed rods of Deoxyribonucleic Acid (DNA), the genetic material which contains the building blocks of life. DNA carries a specific code that gives instructions to our body on how to grow, develop and function. The instructions are organized into units called genes. Chromosomes serve as the storage for this important material, periodically dividing along with cells and replicating to make copies of the DNA they contain.

Telomeres are the ends of chromosomes, which have an essential role in protecting their integrity in the process of cellular replication. One common analogy is that they are like the plastic caps at the end of shoelaces which keep the laces from unraveling. Telomeres are formed by repeats of a DNA sequence, where in humans the telomere sequence is TTAGGG, along with associated proteins. This sequence is usually repeated about 3,000 times and can reach up to 15,000 base pairs in length.

The function of telomeres is to protect chromosome ends from chromosome fusions and degradation, therefore, ensuring the proper functionality and viability of cells. 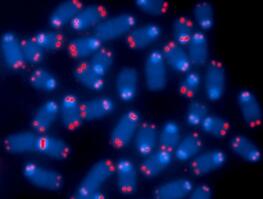 Why are telomeres important?

Cells stop duplicating when telomeres become too short. Therefore telomere length is considered to be an excellent biomarker of tissue renewal capacity and of an organism’s natural lifespan. Telomeres progressively shorten with increasing age as a consequence of cumulative cycles of cell division that are required for tissue repair and regeneration. This occurs both in differentiated cells as well as in stem cells. Telomere shortening has been demonstrated to impair the ability of stem cells to regenerate tissues when needed. Animal studies have shown that an accumulation of critically short telomeres causes more rapid aging. Interventions that decrease the rate of telomere shortening with age, such as enhancing telomerase, can delay aging and increase longevity. Thus, therapeutic strategies based on telomerase activation are envisioned as potentially important for intervening in age-related problems.

Telomerase is an enzyme which is able to lengthen telomeres and repair shortened telomeres by re-growing them. Essentially, telomerase adds telomeric repeats to the ends of the chromosomes. Each time a cell divides, telomeres gradually shorten until they reach a crisis point that signals cell division to stop (also known as the Hayflick limit). But telomerase counteracts this telomere shortening by adding DNA and building back the chromosome end each time a cell divides. This means that the chromosome itself is protected, and an accurate copy of it is made for the new cell. The cell can continue to renew itself. Every time cells divide, their telomeres shorten, which eventually prompts them to stop dividing and die. Telomerase can slow, prevent, or even reverse the shortening of telomeres that comes with cell division. Telomeres can, in a sense, be renewed by telomerase.

Thus, telomerase gained a reputation as a fountain of youth. The action of telomerase allows cells to keep multiplying and avoid ageing. 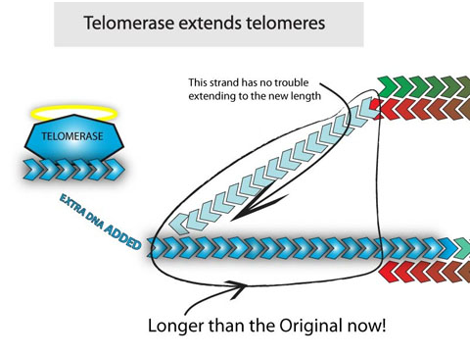 There are several indications that telomere length is a good predictor of lifespan. Accumulated data support the notion that the loss of telomere repeats in (stem) cells and lymphocytes contributes to human aging.